I removed the makings of a nest. Several times. But then I got sick, and when I made it back to the box in the side yard, they’d laid their eggs. Cream-colored, speckled brown.

And so I left them. And watched them. Since they were busy here, I reasoned, they’d leave the other box alone. So I took pictures daily after the babies hatched and grew into soft balls of fluff. I even saved them from the kestrel I saw clinging to the box one day.

After all, His eye is on the sparrow, right? A pair of bluebirds showed up, too. They got married and set up housekeeping in the backyard. Five sweet little blue eggs cupped. And one day when I checked in like any good bluebird landlord, two pink what-my-husband-called-aliens quivered in the nest, soon joined by their siblings. So I took pictures daily and watched them grow bigger by, it seemed, the hour. They started to sprout feathers flashed with blue. And then their eyes opened, and one looked at me that day I lowered the door and hovered my iPhone above them.

But not until I came inside and enlarged the photo did I see the blob of blood on the back of the box, the open sores on the nestlings’ heads. And I was sick because I knew this was the work of a house sparrow–a HOSP. These birds are non-native, introduced from their natural surroundings in England to this strange new land. And they’re fierce bluebird competitors.

When these soft balls of fluff grow up, they can turn into bullies and murderers. They might enter a bluebird house, maim and mutiliate and even kill parents and children. They’ve been known to build a nest upon the dead.

Mama bluebird disappeared, and I watched Papa continue feeding duties. I hung some mylar streamers on the box in order to scare the bad birds away. I even ordered what are called sparrow spookers and hoped they’d come quickly. I put out extra portions of live mealworms to make Papa’s job easier.

Saturday morning, on day 15 of life, as I headed out for my morning rounds, I was considering a bluebird doctor. Perhaps a call to a rehabilitator, a removal of the nest to save the babies. But as I approached the box, I noted dried grass protruding from the entrance. I feared what I would find.

But what I found was—nothing!

In the box or on the ground. And no sign of struggle. No scratches that would indicate a larger predator. I don’t think they were ready to fledge, but maybe it’s possible Papa thought life outside the box was safer than inside?

Their fate remains a mystery.

I removed the nest and later saw Papa. Alone.

I named him Job. 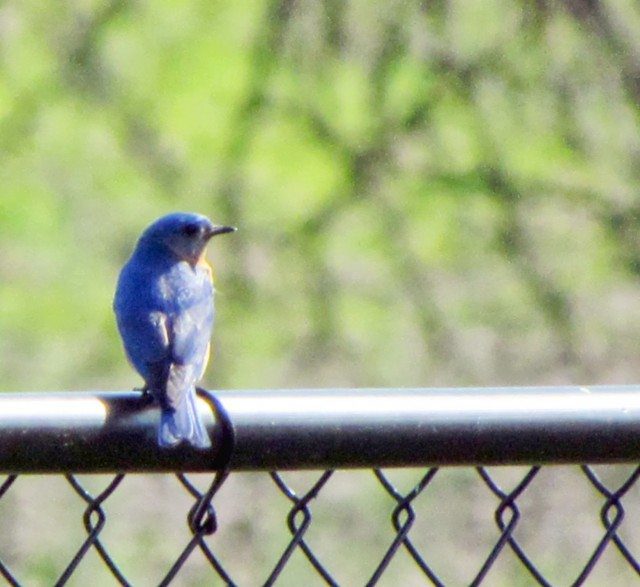 I wonder. How did all the animals co-exist before the fall? I’ve got so many questions I want to ask when I see God face-to-face. Like how could He allow such destruction and pain on this cracked canvas. Why so much suffering, so much brokenness?

But then I think at that point the old will have passed away and perhaps it won’t matter when we pass through the veil.

This morning I check the bluebird houses again. One remains sadly empty. The other has the makings of a fresh nest, and when I pull it out, I see it nestles a single cream-colored, brown-speckled egg.

But I’m a grief-stricken bluebird grandma.

I sigh, but I don’t hesitate.

I throw the nest to the ground.

And then I stomp on the egg.

for reflection value by design

for reflection who’s in control here?
28