elora is a storyteller who lives in austin with russ, her chef-husband who flutters her pulse. elora poses as a teacher during the day, working with high school students and dreaming of ways she can get back to africa. she loves words, believes rescue is possible, is addicted to coffee, and is a 20-something with a 19 year old surrogate son named devonte. you can read more of her story at eloranicole.com


Sunrises make me come alive. I’m usually up far before the sun makes an appearance anyway, so when the first light of the day creeps its way across the sky I can’t help but smile. Sunsets are relaxing – the colors slowly collapsing into a starlit night. But sunrises? Sunrises take my breath away. I think it’s the colors. The fluorescent oranges and purples and reds screaming the start of a new day – reminds me to take a breath, embrace a fresh beginning.

It was three months ago, in the middle of a gorgeous sunrise filled with glowing iridescent clouds and trees that looked on fire, I met her. We both arrived at school early, before the janitors came and lights in the classrooms made a dance of electricity. We sat next to each other, completely silent. I fingered my Moleskin, watching the sunrise and waiting for a whisper of a beginning so I could start writing. Writing has always been my escape. Building new worlds and peaceful settings is my way of combating my own surroundings – harsh, violent, selfish – ripping every part of who I was to pieces. But I wouldn’t be ruined. I made myself a promise – I would make it out alive. I glanced down at my journal and brushed my finger across the cover. So many thoughts, so many hopes and dreams just waiting to be realized. I closed my eyes and took a deep breath and focused again on the colors in the sky forming a symphony of beauty.

And then I heard it. She was crying. I remember distinctly the feeling of dread; the sniffs to keep her tears at bay interrupted her coughs to cover her muffled sobs; I was stuck. I wrinkled my eyebrows in exasperation – I hated coming into contact with people who cried, especially those who made a habit of it. I tucked my brown hair behind my ear and focused on the light blue taking over the deep violet of the sky.

“I never should have gone home yesterday.”

My insides sank. Was this girl seriously trying to make conversation? My eyebrows bent in frustration as if suddenly my nail beds were absolutely fascinating…I hoped her monologue would end there. I didn’t need any more drama in my life. I wrinkled my nose at the discovered dirt underneath my fingernails and made a mental note to clean them when I got home.

“I never should have believed him when he said he’d change.” Her words were stilted, interrupted by hiccuped sobs.

Obviously she wasn’t going to stop talking. I hesitated and glanced at my forgotten journal – the empty pages aching to be filled with thoughts and questions and descriptions…there wasn’t anything I could do but listen, so I did. I turned my face halfway towards hers and raised an eyebrow.

Apparently, that’s all she needed. I never even had to say a word.

She had my attention then. Was she…was she serious? Somewhere in the recesses of my social understanding I found my voice as I tried to ignore the funny feeling creeping inside my stomach.

“Is this some kind of sick joke?”

She didn’t pay any mind to my question. “I had to wait a little longer than normal to get out of the house this time,” she shuddered, “he uh…he fell asleep…” She couldn’t finish – the tears continued, streaming down her face.

“Listen, you don’t have to tell me this.”

She turned and looked at me with mascara inked around her eyes like a wet raccoon. “Do you ever look at the sunrise and feel hope? It’s a new day. What’s left behind in yesterday has passed and there is nothing you can do to bring it back. It’s reliable. The promise of a morning sky supersedes anything I’ve ever known. It’s beautiful. All of the colors, mixing together to create a new shade…” Her voice dropped to just above a whisper. “Without the sunrise I wouldn’t feel alive. The sunrise reminds me there’s always another day coming…”

I was speechless. Who was this girl? I looked closely but didn’t recognize her despite the oversized hoodie, sock sleeves and greasy hair.

Somewhere in the distance, birds began to sing, a three note song of hope and promise; glancing at the sky I gasped, the light blue began to mix with red to create a rainbow of radiating light standing in stark contrast to the few stars remaining stubbornly behind.

I turned to hear more of her story; I was held captive by the intricate connection I felt in such a short amount of time. Forgotten were the feelings of disdain at the beginning of our meeting; I wanted to know more. I wanted a chance to ask questions. I needed to know I really wasn’t alone. I remember being keenly disappointed when I realized she was gone.

Her words echoed in my brain. How had she known my story? How could someone be going through the exact same thing, but different? I looked around one more time, to make sure I hadn’t missed her hiding in a corner or shrinking back undetected, but she was no where to be found. I slumped in defeat. Gathering my bags, I made my way to the front door – glancing the entire time at the faces around me. Where did she go? I wondered, How could she have just…disappeared? My thoughts were soon interrupted by the first bell, signaling the custodians to unlock the doors so we wouldn’t have to wait in the cold anymore. I walked through the doors of my school, my thoughts on everything but the homework I still had to complete for my first period class.

That was when I met her, though. That was when I met the girl who changed my life. I never saw her again, even though I constantly look for her in the crowded hallways of the school. Every once in awhile, I remember the conversation with stunning clarity. This stranger, in one simple phrase, threw my world incredibly off-kilter. And regardless of whether I ever see her again or whether she was a figment of my often times active imagination, I don’t care. Her words give me a reason to believe. Her words remind me of one simple thing: hope.

like what you see? make sure to sign up for the newsletter to receive updates about my upcoming novel.

also, join the love wins community on facebook to receive updates about new posts and projects. 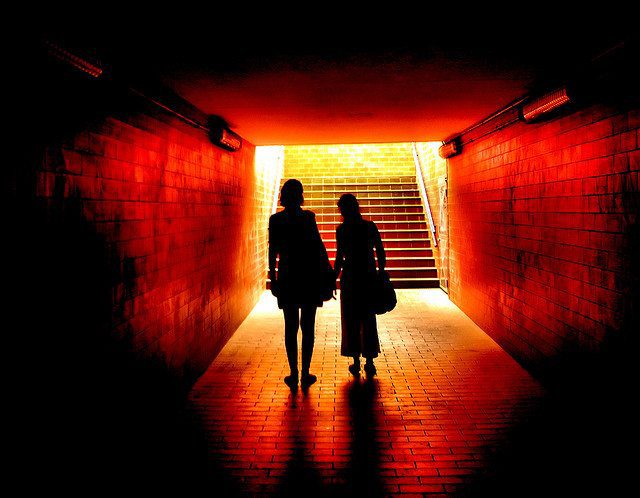