how to derail your next mission trip 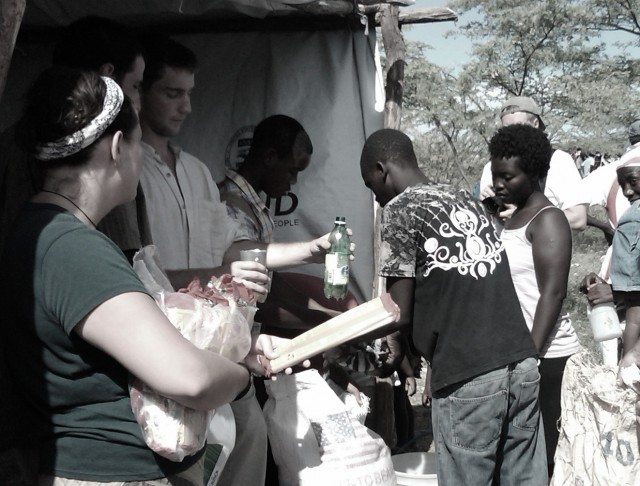 An old dusty school bus rolls through a cloud of dust and out come twenty tired and sweaty volunteers. They have just survived the four hour drive from Port-au-Prince to La Croix, Haiti, after a six hour flight from Pittsburgh to Miami and then Miami to Port-au-Prince. They look tired, but they get right to work pulling their supplies out and getting ready for their week. They’ve come to Haiti to help the La Croix New Testament Mission in its outreach to the larger community, and they’ve come ready to work. They start pulling out large bags of deworming pills, specialty concrete, and Haitian Creole schoolbooks. Right at the end, once everything almost everything has been taken upstairs, one volunteer pulls out several huge bags bursting with candy.

Some volunteers get everything unpacked and a few load up their fanny packs full of Jolly Ranchers and Dum Dums and head out to the soccer field right next door. They kick a soccer ball around with a few of the children and then pass out some of their candy. The children in the Lakous (collection of houses) bordering the soccer field hear the word “candy” and their ears perk up. Within about fifteen minutes the five American volunteers have over twenty-five children surrounding them, arms outstretched asking for candy. Each child’s smile is bright enough to shine out the desperate poverty around them, and both the volunteers and children feel an almost instant connection.

The volunteers come back to the mission right as the sun begins to set and report the great time they had the rest of the group. One volunteer had taken a few pictures and almost instantly everyone is packing their bags full of candy for the upcoming week. The next day at church, everyone crowds around the newcomers as they are introduced to the community. After the service the children run up to the American volunteers shouting “candy candy candy!” Having prepared the night before, the American volunteers empty their supplies; there seems to be no shortage of cheap American candy or smiling children .

The week’s work commences on Monday, and everything seems to start without any trouble. The mobile health clinic has enough supplies for every child, the three carpenters and masons who came begin making some repairs on the school, and an agricultural initiative is about to get underway. Two of the volunteers who had come down had designed a system to help rural Haitian farmers produce more protein by domesticating rabbits. The volunteers were planning on teaching some of the members of the community how to tame and raise rabbits, with the hopes that this would enable poor families to consume more protein. Rabbits are an ideal food source for most rural families; they can live off the grass and weeds that grow naturally in the fields, they are small so their meat won’t go to waste, and best of all they reproduce like rabbits. The two volunteers running the session have only brought a few rabbits to test out the system, hoping that a little bit of time and rabbit’s fecundity would eventually allow every member of the community to have a rabbit family to raise.

They opened the doors and saw a huge crowd, probably thirty or so farmers, ready to learn how to properly raise rabbits. They have everything perfectly translated and were ready to begin their training right after everyone got seated. As the Haitians walked in they all looked very confused. They quickly saw that there were only four rabbits, and when they realized that they would not be getting anything to take home, they turned away and went back home. Only five minutes had passed and the two volunteers running the session found themselves in an empty room with four rabbits and no Haitian farmers interested in raising them. They tried to host the seminar each day after that but when the farmers saw they were not going to get a rabbit, they left.

The day before the group left, one of the volunteers who had put together the rabbit raising seminar saw a Haitian farmer who had came by and quickly left. The volunteer had worked very hard on the rabbit raising seminar and felt that it could make a dramatic improvement for many of the Haitian farmers in the La Croix community. He approached him and asked him in broken Haitian Creole why he had left so quickly. The farmer said that he expected to get a rabbit. The volunteers had been passing out candy left and right, and the Haitians just assumed that the volunteers were only there to pass things out. “Our only interaction with you was when you gave us stuff. We didn’t know you, so we thought you were here to give us stuff. When we heard about the seminar, we expected to get a free rabbit, and when we saw only four small rabbits, we decided it wasn’t worth our time”.

Similar problems continued to come up. The medical team was bombarded by people who came just to get some free food, making it much more difficult for a person with a serious ailment to receive the treatment they needed. The group of craftsmen made some great repairs but they struggled to teach anyone how to make the repairs themselves because. By giving out candy so freely to every child who came by, the volunteers had branded themselves as the people who just hand stuff out, a label that impeded their later initiatives. The volunteers had not bothered to form relationships with the people, and they had not communicated their purpose to the community they were trying to help. Before coming down each group had studied the different issues facing rural Haiti and came up with some ingenious solutions, but all of their preparation was negated by their reputation as people who pass out candy. The Haitians who they were trying to help were not indignant or stubborn; they just assumed that the volunteers were there to pass stuff out and head home.

When trying to help people come out of poverty, when trying to make a difference in the developing world, something as small as candy can derail the best of projects.

(Excerpt from the upcoming e-book The Trouble with Candy in Haiti from BibleDude Press.)

Part Time Writer, Part Time Adventurer. Ray is based in Pittsburgh Pennsylvania, but finds himself wandering around the world looking for places where faith, technology, and people come together and produce an interesting story. Author of the upcoming The Trouble with Candy in Haiti (from BibleDude Press).

how to derail your next mission trip