A recent report by The National Marriage Project revealed that marriage is becoming less important to couples as they decide to raise a family together. Take a look: 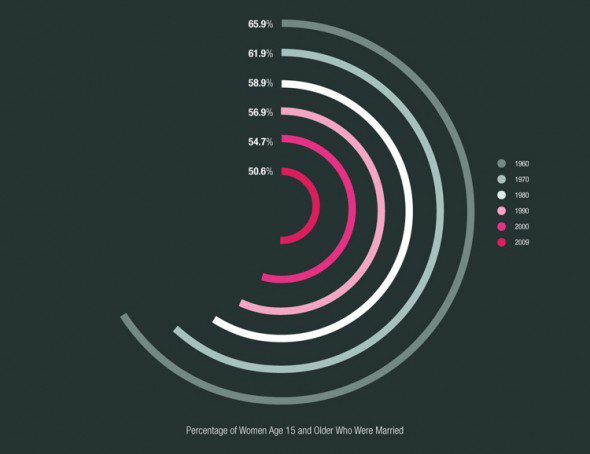 In 1960, approximately 66% of all women over 15 were married in the United States; today, only 51% of women over 15 are married. This decrease is partly due to the fact that women are getting married at an older age. It’s very uncommon for young women to get married before they are in their 20’s.

There could be many other reasons for the decline, but the numbers make it clear that people are avoiding the institution of marriage.

Marriage may be becoming less important to our culture as a whole, but people aren’t remaining single. Instead, they are choosing to stay in committed monogamous relationships, live together, and raise children together. This scenario begs the question…

What makes this kind of relationship different than marriage?

Are we at a point in our national history where the definition of marriage needs to change? It seems there is an interesting philosophical question about “what is marriage.” Is it a covenant between two people and God? Is it a legal contract between two people? It makes me wonder – is there really any difference between a marriage and a cohabiting committed relationship? Or is it just semantics?

It strikes me that religion, and particularly Christianity, has something to offer the world when talking about marriage.

The Bible is full of stories about covenants and promises. In fact, the Bible as a whole is one big love story. God loves each one of us so much that he never gives up on us. He provides for us, over and over again. He fulfills his promises to us – even when we don’t live up to our part of the bargain. God sacrificed everything for us, and he did it willingly and requiring nothing in return.

When it comes to a marriage, one person can’t do all the providing and supporting. If both parties don’t strive to love the way God loves, the relationship won’t work.

It seems to me that if we used God’s love for us as a model for how we should love our partner, there’s not much difference between a marriage and a cohabiting committed relationship. Those people choosing to raise families together without being married should be held to the same standards and expectations as those couples who do choose to marry.

What do you think – is there a difference between marriage and cohabiting committed relationships?

engaged in culture what makes good online community?
bible literacy [the story of God, the story of us]: closing thoug…
41