It is not a habit of mine to sugarcoat things. Every time I write one of these posts, I reread it over and over and find myself grimacing at the words I use. I want to clean it up, soften it, make it “PC”, water it down. I don’t like telling you that Malinda, sweet and beautiful as she was, had rotting teeth. I don’t like that I described the difference between how I was dressed and how the kids on the street in Nashville were dressed. I wonder every time I use the words “homeless” and “poor” if it will offend someone.

The truth of the matter is that we have met people who are homeless. They are dirt poor. In the end, I refuse to mince words. Malinda’s teeth were brown and rotting, and I’ll tell you that so that you understand that these beautiful people have to prioritize surviving on what amount of money they can get panhandling, and teeth sometimes come up low on that priority list. These people do not have homes like you and I. They are poor, they are dressed in what they can find or afford, they eat when it is possible, and they live different lifestyles than us middle class.

So again, I won’t water down what is happening on these streets. I hate that I am describing human beings in the way I am, but it is how it is, my friends. I have hugged men that smelled like urine. I have sat and talked to women who had no teeth at all. I feel like as Christians, we have become too clean, too comfortable, and so we struggle to reach out to these broken people who need Christ more than anything.

One of my favorite quotes is by Mark Batterson in his book, Primal. He said he went to the Galapagos Islands and saw all of the beautiful wild animals and was amazed. Then the next week, he went to the San Diego Zoo. Now the SD zoo is an amazing experience if you go, but compared to the raw, beautiful wildlife of the Galapagos Islands, Batterson was left thinking to himself, “I wonder if churches do to Christians what zoos do to animals.”

We tend to clean up our Christians, make them content with cushy status quo, and nurture that comfort. This is not how it should be. Jesus lived homeless. He left everything to serve others. If we are true followers of Christ, are we not supposed to leave everything to follow? Peter and Andrew left everything, their boats, their nets, their families, their entire livelihoods to follow this crazy man who told them he could teach them to fish for men. Their lives were uncomfortable, unusual, dynamic, and dangerous after that. That is the type of life we are called to as Christians. Following Christ is no soft pursuit.

We, as Christians, are the salt of the earth, as Christ declared (Matthew 5:13). And yet, as Arron Chambers puts it in his book, Eats with Sinners, “Salt in a saltshaker is worthless. Its value comes when it is poured out of the saltshaker.” Are we, as Christians, stuck in our salt shaker? How are we supposed to add flavor to this dull existence if we just sit in our saltshakers, in our church buildings? The world we were commissioned to love is outside of that building. It’s time to go! 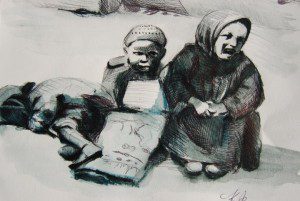 Mike Yankoski was a student at Westmont in Santa Barbara, CA, a prestigious Christian university in a very wealthy and beautiful area. He left everything to live with the homeless on the streets for six months. What prompted this radical decision was a revelation one Sunday. He said that on that Sunday, he was suddenly shocked to realize he had driven twenty minutes past the world that needed him to be the Christian he says he is, to sit in a building, listening to a sermon titled, “Be the Christian you say you are.” The irony of it disturbed him enough for him to drop the comfort zone he had created all his life, and leave everything for the cold city sidewalks and panhandling on street corners.

Sometimes, in trying to bring God to the people on the streets, I find Him already there. The group of young people I hung out with on the streets in Nashville had put together very quickly that I was a Christian, so at one point while Rob was messing around on his guitar, Jay J shouted over to him, “Hey! Play that ‘imagine’ song. You know… that one about heaven.” Rob began to play something else, so Jay J decided to start singing a few lines to try and figure it out. “I can only imagine what it will be like when I walk by your side. I can only imagine what my eyes will see when your face is before me,” he sang. I joined him. “Surrounded by your glory, what will my heart feel? Will I dance for you, Jesus, or in awe of you be still?” Heather and Jackie were arguing over something. Rob was playing a country song on his guitar. The city cars and tourist noise enveloped us. But Jay J and I were there, offering up those few lines in worship, and I’m sure God appreciated it just as much as a church choir on Sunday morning.

I sometimes think the Christians here in the United States need to be truly disturbed. I hope and pray that Obama makes every day a challenge to be a Christian. It is not until we are shaken out of our comfortable salt shakers, released from our cush zoos, that we are going to be truly effective in this world. It is then that we will lift our hands to heaven in praise because it is in experiencing that overwhelming redemption that God has offered to this undeserving, broken world that we will feel and know at least a portion of God’s love for us.

Malinda may have had rotting teeth, but her smile was beautiful. Sleepy may live on the streets, but he knows God and he ministered to Viktor and I more than the pastor who preached to us the following Sunday. Jay J may have been shirtless, covered in tattoos, and sitting on that street corner, but his song of worship was just as sweet, if not sweeter than those you hear in church on Sunday. God loves these people, and so do I.

[Jesus said to them, “It is not the healthy who need a doctor, but the sick. I have not come to call the righteous, but sinners.” ] Mark 2:17

Get the latest updates for the seventy-two project.