the real soul surfer [an interview with rich peluso]

If you haven’t had a chance to check out the movie Soul Surfer at your local theater, you should definitely check it out.

It’s a movie based on the true story of Bethany Hamilton, who lost her left arm in a shark attack and, against all odds, became a professional surfer. But perhaps even more significantly, it’s a movie about the role faith plays when the going gets tough. Here’s a glimpse:

I recently had a chance to chat with Rich Peluso, Vice President of AFFIRM films, Sony Pictures, about the film, and here’s how the conversation went.

Crystal: When you put the movie together, did you have a target audience in mind at all?

Rich: What you should probably know is that I’m the father of 4 girls. At the time I found the script, my youngest would’ve been 7 and my oldest would’ve been 15. Really what happened was, I had a friend of mine run into me at a coffee shop and hear that we were making this movie when in fact we weren’t. It was kind of a rumor that got started because Bethany’s manager had been told that the script had been dropped off to us, which it had been, along with many others…but it was kind of in a corner in a stack and it was never really destined to be read. But because I ran into this friend who happened to be a friend of Bethany’s manager, then I went out and sought the script. When I read it, I realized that we had something that would fit. It really kinda worked with what we were looking for, which was a film that could work for the whole family.

Soul Surfer was something we envisioned would be very exciting to tween and teen girls but could potentially expand up into the young 20s, which a lot of those people grew up with Bethany. They were the same age as Bethany when Bethany was attacked and it was all over the news. And if we could make it something that really mattered, a message that just kind of rung the bells in the heart and minds, then we could do something that very few films do and that is get the non-frequent, non-traditional theater goers to show up.

Crystal: One of the most refreshing things for me was that it dealt with really tough issues and it did it in a really healthy way. So often movies leave out “the faith-factor” but I think this message really rung true for believers and non-believers alike – that when tough stuff happens, we really begin to think about questions of faith, whether we’ve believed for all our life or never believed at all. Why was it important for you and for the team that put this together to really make God play a central role in the film?

Rich: One of the things I found attractive about the script is that it’s based on a true story. So we didn’t have to dance around the trap of either minimizing faith content to make it “more acceptable” to a mainstream audience, nor did we have to be faced with any temptation to actually load-in faith to make it something that would resound with the core faith-based community. We were more focused on faithfully telling Bethany’s story and, whether you like it or not, God plays a very central role in Bethany’s life and her family’s life. So you can’t do a movie about Bethany and not show her faith anymore than you can do a movie about Bethany and not show her surfing. It’s who she is.

Crystal: So it really took care of itself.

Rich: Yeah, absolutely. After we shot the film we tested it with various audiences. One of the things we were looking for was to see if a more mainstream audience would feel like there were too many “religious elements” in it. And we had a small number of people express that, but it was a very small minority. This isn’t a Christian movie. There’s no salvation message in it. It sought to faithfully tell Bethany’s story.

If you’re a believer and you’re in a Christian home, you’re dealing with life issues every day about your work and about stress and about marriage. How often when you’re having these discussions with your husband or your mom or whoever do you whip out your Bible and start quoting scripture? It’s in your heart and in your minds. It’s coming out in how you live. And that’s something that we worked hard to have happen within that family. One example is the hospital scene when Tom is talking to Bethany and starts to quote scripture and Bethany responds and fills out the rest of that scripture.

On the surface that’s a very simple scene, but if you go deeper, what that simply portrays is a family who reads and memorizes and knows Scripture. Which then, the back story to that is that they obviously go to church and they read the Bible and they know the Scripture. So we tried to do it organically and naturally in the story without feeling like seeming like we were trying to hit people over the head with the Bible.

Crystal:Did you find that you had to be sensitive at all when marketing the film because of its faith message?

Rich:That’s a very real issue that we grappled with in the marketing process. Unfortunately people love to categorize everything that they experience. They label it – it is this or it is that. As soon as you introduce a Judeo-Christian worldview or a Biblical worldview, you automatically have people who want to label it and categorize it as a “Christian” movie, or marginalize it. So we really did take a two-angled approach on the marketing.

We worked with FilmDistrict who is our distributor, and they put a significant amount of money towards traditional mainstream movie marketing, which took a straight-up mainstream inspirational movie angle. It’s not that it downplayed the faith elements, it just didn’t highlight them. And then we had another group of folks that came on board worked specifically towards marketing to the faith community, with a very aggressive presentation of the faith elements within the story. So yes, it did have an impact on our marketing, and we think we struck the right chord out there.

Crystal: If there is one message that you hope that people take away from seeing the movie, what would that be?

Rich: That God loves you. And that he loves you so much that he has a plan for your life. And that when circumstances surround us that pull us down and knock us down and dispirit us and appear to be obstacles that would seem to indicate that our gifts or our passions or the desires of our heart are in conflict or are impossible to achieve, that nothing is impossible with God.

One thing that I was most excited about is that there were a lot of unchurched kids that saw this movie over the last couple of months. And for a lot of them, it was the first time they ever saw things that they’ve never seen before: a functional family, parents that love and support you, siblings that love and support you, you know, even a youth counselor – what is that? Some kids have never even understood that concept. That there’s an adult that pours itself into these kids lives and are there, not to get in the way of or replace parents, but to bolster that and support it. You know, even the whole idea of mission or service is foreign to so many kids. That was probably the most satisfying and exciting part.

Crystal: One of the great things for me was to think about how many kids would see how normal that family was. We hear a lot about how Christian families are “crazy” – it was just refreshing to see, you know hey – that’s my life! And that other people were able to see that being Christian doesn’t mean your crazy.

Rich: Yeah, you know it’s funny you say that because so many people have said that. You know, non-Christians say, “Wow, they were just really normal people and Christians say, “oh it was refreshing to see just a normal Christian family.” And in both cases, that’s just sad to me. And it was part of the design for picking this picture was that it was a great opportunity to show a healthy, normal, american Christian family living out their faith every day.

the real soul surfer [an interview with rich peluso]

engaged in culture technology: a cancer in the universe? 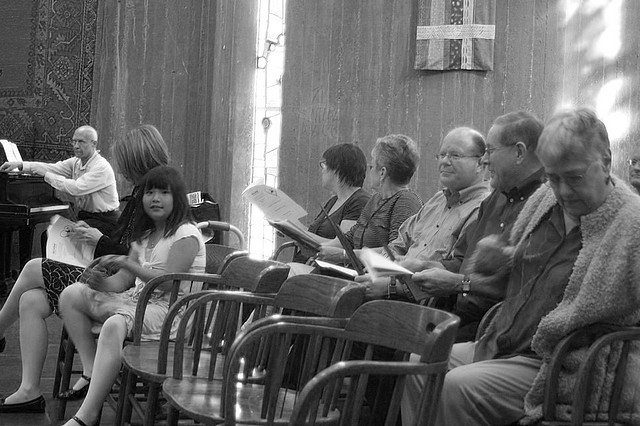