when the waves come crashing 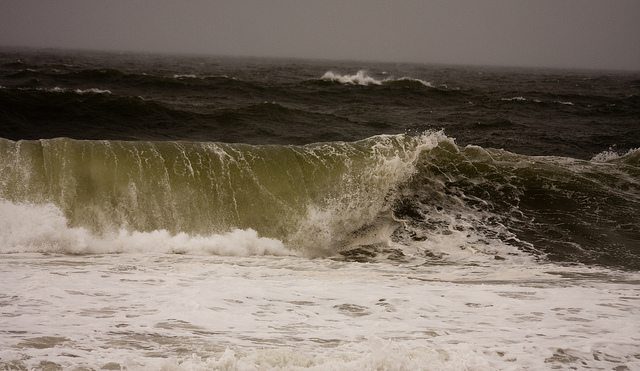 I am a Lutheran Pastor (ELCA) in Upstate New York. I am married and have two children. I blog at Lutheran Grilled Cheese about how we connect with God and our daily lives.


In have a lot of memories from playing football in high school.  I was a pretty good lineman (both defense and offense) and I loved playing the game.  One of my memories was a drill where guys would line up in two rows about five yards apart.  Each player would have these padded football shields.  We would take turns running through the gauntlet to the end where our coach was holding on to a 48″ football dummy bag.  Our goal was the run through t gauntlet until we got to the coach and then we would hit him as hard as we could driving him back five to ten yards.  The trick was as we were running through the gauntlet our teammates would be hitting us with these dummy shields as hard as they could, trying to knock us down.  So we would run entering the gauntlet and make it twenty-five yards to freedom.  After a few times doing this drill I found if I absorbed the hits and focused on my coach, I could make it to the other side with very few problems.

I suspect that’s how Peter felt as he started his journey walking on the water towards Jesus.  He kept his eyes focused on Jesus, taking one step at a time and he let all other distracts fall by the wayside.  This worked for awhile but soon the hits became too much and he started to fall, he took his eyes off of Jesus and started to sink into the abyss.

I don’t know how long Peter took his eyes off of Jesus, my guess is a second or two.  But during those few seconds Peter lost his focus and he started to fall into the water!!! Now, I am sure he was terrified, I am sure his life started to flash before his eyes,  I am sure he thought he was going to die but suddenly Jesus came into the picture and Jesus pulled Peter out of the water. Thanks be to God!

We can totally relate to Peter!  Because we too have our battles to face, they might not be football players trying to knock us down or enormous waves come crashing around us.  But we have challenges in our lives and no matter how hard we try to keep our eyes on Jesus we get distracted, worried, even overwhelmed by the all that is around us. Many of the storms that we face come in the form of financial struggles, political unrest, social issues, and medical problems just to name a few.  Every where we look we see problems, and we know we should trust them all to God, it just isn’t that easy.

So verse 31 is a key verse for our lives: “Jesus immediately reached out his hand and caught him.”  Jesus reached out and pulled Peter out of the water and onto the boat.  Jesus also reaches out and pulls us out of our troubles. Trust me this did not happen in football.  When I knocked someone down I could not help them back up, otherwise the coach would yell at me! But that’s not what happens with our faith lives.  That’s why Jesus’ actions are so powerful.  “Jesus immediately reached out his hand and caught him.” There it is, in a heartbeat Peter’s life is changed — instead of sinking to the bottom of the lake he is in the boat with Jesus, worshiping him and thanking him for saving his life.

In a perfect world Peter would have kept his eyes on Jesus…and in a perfect life we would too. However, if we are honest with ourselves we know that we don’t.  But we also know that when we falter, or even fail, Jesus will be there to grab us, to catch us, to support us and set us up straight again, ready to give it another go.

when the waves come crashing

authentic christianity are you in business for the money?