[serialposts]Now, let us again ask the questions that we began with.

So how does David get to this point of overwhelming trust in God in his declaration, “O LORD, my rock and my redeemer”?

And how does he make such a confession of trust and in such a personal way?

As we have seen, David is able to make such a declaration of overwhelming trust because he has an understanding that God is greater than all of creation.  In fact, because he is the Creator of creation he controls its very existence.  He is more consistent than the path of the sun, which occurs every day.  He is more powerful than the most powerful phenomenon in the universe.

David is able to make such an overwhelming declaration of trust because he understands the word of God to be perfect, pure, and right.  He not only knows this to be true, but also understands that when a person lives the law of the Lord there is great reward in life.

Finally, David makes this declaration of overwhelming trust in the Lord because he understands that he is nothing without the grace of God.  As we observed in his three prayers, David knows that only God can forgive his sins and protect him from his sin’s domination over him.  Furthermore, David understands that with God’s grace there is no way that he can be acceptable before the Lord’s sight.

Because of these perspectives David is able to declare an overwhelming declaration of trust, “O LORD, my rock and my redeemer” (19:14; ESV).

I am currently serving as a youth minister at our church in Sarasota, FL. I am married to Tera (15 Years +) and we have 3 beautiful daughters. 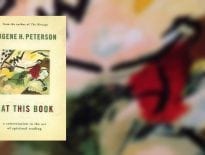 bible literacy book review: eat this book [a conversation in the …
0