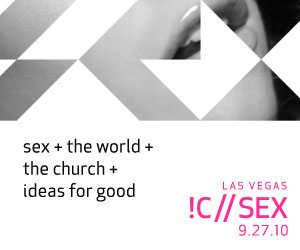 I don’t know if I really knew what to expect when I agreed to lead a blogging series on sex for The Idea Camp. But I know that anytime you get a bunch of bloggers together to talk with a single focus, the result is usually something pretty special.

Here’s a quick recap of the posts that we saw come in this week:

Coming up next: Sexual Abuse – Week beginning Sunday, July 25
It usually leaves invisible scars that never go away. And it can be root of other issues not only sexually, but relationally. This discussion will focus on not only the damage that is caused by sex abuse, but with special consideration of how to help those hurt by it with immediate and long-term healing. If you’re interested in participating in this conversation, then let us know in the comments or contact @bibledude on Twitter.

Are you enjoying this conversation? Then consider coming to !C//SEX Las Vegas on 9.27.10. Register now!