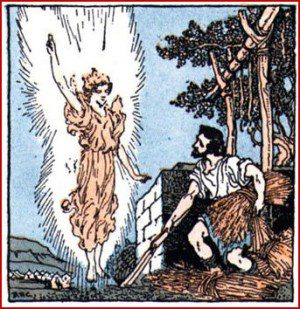 No one likes selfish people, but our natural human tendency is to be selfish (at some level). We tend to think of how things affect ourselves before we ever consider how it affects other people.

In the English language, there’s no literal distinction between the singular and plural versions of the word “you”. Therefore, often when people are talking, and they say the word “you”, our natural inclination is to think of the singular “you” as opposed to the plural referring to whatever community we may be a part of.

This selfishness has nasty implications in the workplace. When there’s a group of people who are all out for themselves, the organization is less likely to achieve its goals.

And as creatures of habit, we tend to slip into the same behaviors as the people around us. So when it comes to breaking away from selfishness, we typically need a leader to show us how it is done.

First let me give you a little background for what I’m about to share. After Deborah (in the Book of Judges), the Bible says that there was about 40 years of peace in the land. Then the Israelites started acting up again.

During this time, the Midianites started coming in an pillaging the homes and land of the Israelites. It got pretty nasty. In fact, it was recorded that these invaders were so many in number that they couldn’t even be counted. Not to mention that they would simply take and destroy so many crops and livestock that the people had nothing left to live off of for themselves.

In typical Israelite fashion, these troubled people started to cry out to God again. This is where Gideon comes in. Take a look at how Gideon is introduced in Judges 6:11-13…

11 Now the angel of the Lord came and sat under the terebinth at Ophrah, which belonged to Joash the Abiezrite, while his son Gideon was beating out wheat in the winepress to hide it from the Midianites. 12 And the angel of the Lord appeared to him and said to him, The Lord is with you, O mighty man of valor. 13 And Gideon said to him, Please, sir, if the Lord is with us, why then has all this happened to us? And where are all his wonderful deeds that our fathers recounted to us, saying, Did not the Lord bring us up from Egypt? But now the Lord has forsaken us and given us into the hand of Midian.

The first thing that I want you to notice is that Gideon was beating out wheat in order to hide it from the Midianites. What does this mean? Well, at minimum it means that he was preparing to protect himself (and likely his family) by thinking ahead enough to be able to keep some of his precious crops.

I think that this may say a little bit about how a self-centered perspective is okay in certain situations (especially as a safety mechanism). So as I continue here to talk about the importance of selflessness, I want to also point out that you should not be so selfless that it causes danger or harm to fall upon you.

Thinking about yourself is not a sin…

The next thing that I want to point out is that the angel of the Lord referred to Gideon as a “mighty man of valor”. Gideon contained a quality that made him worthy of honor. Valor refers to the quality of bravery or courageousness. I’m not sure if Gideon had ever been in battle before, but he has certainly earned some respect, and was approached as being worthy as a leader.

Most importantly, I want to point out Gideon’s response to the angel of the Lord. When the angel said, “The Lord is with you,” how did he respond?

His response surprises me.

He responds in he plural asking how it could be with “us”.

I believe that it is this type of selflessness that made him worthy of being the leader that he was. He was about to be called on by God to deliver the people from this enemy, and he never once thought of himself first. God honors this kind of selflessness. Gideon went on to win one of the greatest battles in the Bible by allowing God to work through him.

This same principle is true of the workplace. It is when we (as leaders) include ourselves in the ranks of people that we are in community with in our organization that we can truly reach a position of being honorable.

Let us learn the type of humility and perspective that Gideon had, and become mighty men (and women) of valor worthy of the battle that we find ourselves in at our own workplaces.

…We must become less in order for Him to become greater…