[the africa diaries] day seven: wrapping up business in kenya

She walked up to me as I was setting up for my morning session, shook my hand, and simply stated, “I am Alice.” We laughed about that for a moment, but I never realized that this was about to be one of the most powerful moments of this trip for me.

In order to understand what I mean, you’ll have to understand part of the lesson that I was responsible for. I had taught the last lesson of the day in yesterday’s session, and was about to pick up where I left of this morning. I was responsible for teaching the section on finances. Before we finished yesterday I had already started my piece on the importance of separating personal and business money. One of the illustrations that I used was this story about a fictional person named Alice…

Alice has a small shop located in front of her house. She sells groceries, such as eggs, sugar, flour, and soap. If she needs any sugar or other groceries, she takes them from the store. Sometimes Alice loses customers because she runs out of items. She does not have enough money to buy more items until she sells something. She often does not have enough money to buy food for her family. She wonders why her business is not making money. She must ask her husband for more money to put into the business.

After this story we would continue by discussing her situation and how not separating personal and business money was affecting her ability to be successful in her business. So when this woman came to me as I was preparing for my morning lesson and introduced herself as Alice, I thought she was referring to the Alice from this illustration!

As we laughed she continued by telling me, “My real name is Alice. But today I am a new Alice!” In a sort of ironic twist, she actually meant that she was both (1) really named Alice, and (2) that she was also the Alice from yesterday’s lesson. She proudly told me that, “no more will [she] be the old Alice who is not wise with her money!”

She was incredibly grateful for what we were doing for her, and realizing the impact I was having made me feel awesome!  I felt like I was somehow becoming and important part of Alice’s life. Before I left for this trip, one member at my home church had told me that God would ‘knit my heart with theirs, and I just starting to realize that this was actually happening!

By the end of this day we had completed another great session with some amazing people. They were so grateful for what we had done that they even sang to us…

As we wrapped up our work in Kenya, we had a couple of days over the weekend before we needed to be in Uganda to do it all over again. So we headed out for a little retreat!

We had found a GREAT deal at a tented camp called Sweetwater in the area of Mount Kenya. I was incredibly excited about this much needed safari retreat!

As we arrived and got checked in, we immediately had to select the safari drives that we were going to go on. One of our options was to do a night drive, and our best chance for that was going to be to do it that night. 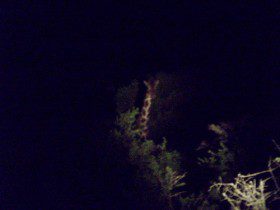 After dinner we loaded up in the van (a special one that the roof opens on, especially made for safari drives like this), and headed out to see some of the nighttime activity of the animals.

We saw some cool giraffes, elephants , and many other cool animals. But the highlight of the night was watching a lioness stalking a pack gazelles! It was amazing to see the big cat crouch down into an attack position and attempt to pounce her potential dinner! After several attempts this lioness never did get her prey, but to watch it was an experience that I will never forget!

After a busy week it was great to be in a place of rest but it was even better to be out in the wild in God’s amazing creation! This might sound kind of funny, but there is something about being under the African sky watching these animals that makes Creation make more sense than it ever had before.

After this amazing night drive, it was time to go get some rest. We had to get up early the next day for more safari and enjoying God’s beautiful creation…

Check out more from this series in the africa diaries.

[the africa diaries] day seven: wrapping up business in kenya