the orphan i am [a theology of adoption] 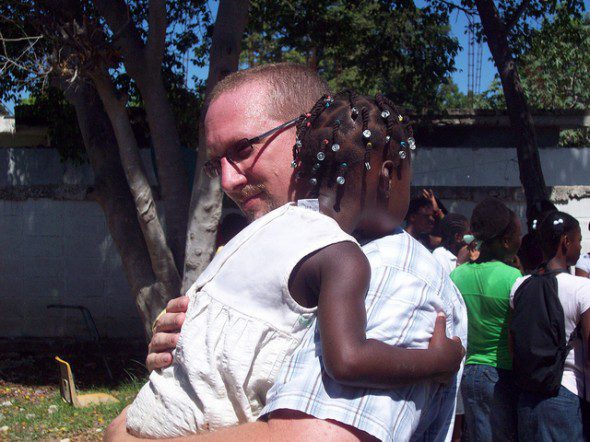 It’s always been easy for me to overlook the orphan care epidemic as something that ‘other people’ are working on. And because the Bible talks a lot about taking care of the fatherless and the orphan, I’ve always considered their work admirable… and potentially worthy of support.

That is until I spent some time with a group of orphans in Haiti.

Haiti has always had an overwhelming number of orphans, but the earthquake on January 12th, 2010 opened the floodgates of children left parentless.

Of course I felt bad for the kids, but it was the soft heart of my seven-year old son that made me realize that I needed to do something more.

I want to pray for all of the little boys and girls who don’t have a mommy and daddy anymore and have to sleep outside tonight because of the earthquake.

Because I started seeing the heart of God manifesting itself through my very own child.

Since that time, our family has been dedicated to making a bigger difference. I went on a mission trip to Haiti in August, and stayed at a boys orphanage housing about 50 kids. Our team built some strong connections with those boys. Watching them cry when we left was one of the most difficult things that I’ve had to do… ever.

It was a difficult time because they rarely get the kind of love that we showered on them that week. Their caretakers took good care of them, at least as much as their means allowed (one meal every other day). But the few adults that provided for them is no replacement for the love of a parent.

A simple hug becomes a rare special event for these children.

This is a stark contrast to the life of my child (and so many others in the U.S.). When I got home, we would get (and give) more than our fair share of hugs. We’d get to cuddle on the couch while relaxing and watching TV together. We’d do all kinds of things that those kids back down in Haiti would probably never get from an adult in their life.

This made me think…

Isn’t that what we are spiritually without God? Aren’t we all orphans wandering this earth with little to no hope of ever experiencing True Love?

And that’s really why I believe that this whole issue of orphan care is so important for the church to get a hold of.

We’ve been given a new life, and it’s a life full of hope and a with a great future. We no longer have to suffer alone, but get to experience the great joy that comes with being in a family like ours.

The best part is that we have the ability to share this hope with others. Not only spiritually, but also physically and emotionally.

This post is part of The Idea Camp’s blogging series for #icorphan. I’ll be facilitating a workshop at The Idea Camp conference called ‘Orphan Care for the Everyday Activist’. So I’ll be sharing on this topic throughout the months of January and February here at BibleDude.net, and over at The High Calling.

the orphan i am [a theology of adoption]